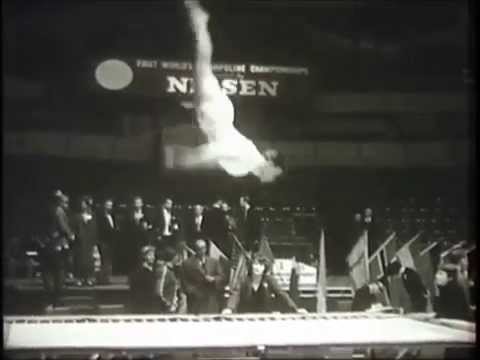 The sport of trampolining has its origins in the circus.

In the 1930s, an American gymnast named George Nissen was inspired by trapeze artists performing acrobatic tricks when bouncing off the safety net. He built a prototype trampoline from canvas and inner tube rubber to help with his tumbling training.

Nissen toured the USA and Mexico perfoming at fairs and carnivals. In 1941 he formed a company to build and sell trampolines, taking the name from the Spanish word trampolin meaning springboard.

Trampolining quickly become a popular backyard activity, and was even used to teach American pilots to orient themselves in the air during World War II. Nissen continued his touring perfomances and took his demonstrations to Europe to promote his trampoline equipment and the sport of “rebound tumbling".

The first individual trampolining competitions were held in colleges and schools in the USA and then in Europe. Initially they had no defined format. Competitions gradually became more codified, so that by the 1950s the 10 bounce routine had become the norm.

Trampolining became a competitive Olympic sport at the 2000 Summer Olympics in Sydney.

How the Trampoline Came to Be, Smithsonian Magazine

The 4 Disciplines of Trampoline Gymnastics

Competitive trampolining routines are made up of combinations of 10 elements, demonstrating a variety of forward and backward twisting and non-twisting elements, landing in one of four positions:

Athletes perform two routines showing consistency of height, skill and minimum deviation from the centre of the trampoline bed.

All about Individual Trampoline - We are Gymnastics!

Two athletes perform exactly the same routine of ten elements simultaneously on adjacent trampolines. Each athlete is scored separately for their form in the same way as for individual competitions. The pair is also judged for synchronisation.

All about Synchronised Trampoline - We are Gymnastics!

​​​​​Athletes execute a short run up on to a two-level mini trampoline to perform a rebounding skill before a dismount on to a landing mat.

All about Double Mini-trampoline - We are Gymnastics!

All about Tumbling - We are Gymnastics!